You are currently on our IE site. Shop on our United States site using US dollars ($).
Home > The Canadian Gold Maple Leaf

The 1oz Canadian Gold Maple Leaf is produced by the Royal Canadian Mint and is one of the most popular gold coins in the world.

When launched in 1979, the Gold Maple Leaf was the world’s first 24 carat bullion gold coin. Its most recent version is composed of 99.99% gold, which is very close to pure gold. The Canadian Government backs and guarantees both the authenticity and purity of the gold coin.

GoldCore is Irish owned and is the oldest and most respected precious metal dealer in Ireland. We have sold and delivered Gold Maple Leaf coins to investors in Ireland longer than any dealer. We specialise in advising clients on the best allocation and means of investment for them.

The front of the coin bears a stylised head of Elizabeth 11 and the words "Elizabeth 11" and "50 dollars", along with the year of issue. The Queen of England is both the Canadian as well as British monarch.

The back of the coin bears a detailed and near proof quality representation of Canada’s national emblem, the Maple Leaf.

On each side, the coins bear the gold purity specification of 9999 with "CANADA" as a circular inscription across the top. "FINE GOLD" "1oz OR PUR" in French is also included on the lower side. What’s interesting is that "MAPLE LEAF" does not appear anywhere on the coin.

The Maple Leaf is a legal tender in Canada and thus has a face value of $50, although it is also known as a non-circulating gold bullion coin.

The1oz Gold Maple Leaf coin was first considered by the Canadian Government in 1977. The reason for this was to create demand for Canadian mined gold, as well as to compete with the South African 1 oz gold Krugerrand coin. The Canadian federal cabinet in fact specified that the Maple Leaf had to be minted from gold mined within Canada. 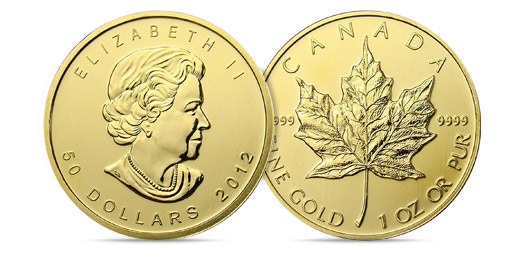 The coins become very popular, leading to renewed legislation from the Canadian Government to continue its production.

The Maple Leaf was launched with a fineness of .999 or 99.9% gold, which at the time, was the highest gold content of any gold coin ever produced. The Royal Canadian Mint took it a step further by increasing the purity to .9999 gold. Since then, all Maple Leaf coins have been minted with 99.99% gold.

As an Irish investor, one very critical consideration when you purchase gold coins is where to store your investment. Being compact, durable and portable makes the coins easy to store. However, their high value requires secure storage, in particular with the risk of burglaries on the rise in Ireland. It makes it inadvisable to store valuables in your home.

GoldCore has a partnership with Sentinel Vaults, Irelands leading safety deposit box and document storage company. GoldCore customers receive secure storage facilities from Sentinel and a discounted rate. The secure Sentinel facility is located in the heart of Ballsbridge, Dublin 4.

More than 22 million 1oz Maple Leaf coins have been produced for over 30 years. It has created a very liquid secondary market for the coins, and also ensures competitive premiums over the spot price.

The majority of the Maple Leafs were sold to the US and European markets and recently, into Asia as well. It has made it very well known internationally and provides a well-developed trading network for the coins buying and selling.

The Maple Leaf also has the highest purity of any 1oz bullion gold coin in the world at 9999 fineness. IT makes an investment in the coin an investment in pure gold, which is ideal for diversification of investment portfolios and exposure to the gold price.

Since the Maple Leaf coins were never used as coins in circulation and were minted to near proof like finish, most of those in the secondary market retain their original condition.

The 1oz denomination of the Maple Leaf makes it simple for Irish investors to value and price the coin using the international spot price of gold. As a Canadian legal tender, the Maple Leaf is also not subject to VAT in Ireland.

Furthermore, as a 1oz gold coin, the Maple Leaf is both portable and easy to store. The small denomination has the benefit of divisibility, allowing you to trade part of your investment without selling your entire portfolio.

Since 1969, the Canadian Royal Mint has operated as a Crown Corporation. It operates under Canadian Legislation and is wholly owned by the Canadian Government, but has an independent board of directors. The RCM was originally a branch of the Royal British Mint when it was launched in Ottawa in 1908. It's Winnipeg factory produces circulating coinage for Canada and other countries. The world famous gold and silver refinery is located in Ottawa and mints high-quality bullion bars and coins.