You are currently on our IE site. Shop on our United States site using US dollars ($).
Home > Our products > Silver Canadian Maple Leaf Monster Box of 500 Coins 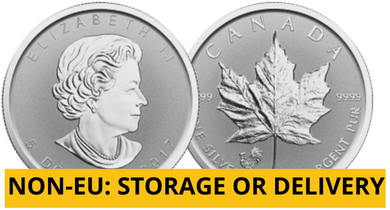 The Silver Maple Monster Box contains 500 of the 1oz Canadian Silver Maple Leaf Coins. These coins have been in production since 1988 when the Royal Canadian Mint decided to produce a coin of 99.99% purity.

The Royal Canadian Mint is wholly owned by the Canadian Government and it is they who guarantee the silver content as well as the authenticity of the Canadian Silver Maple Leaf Coin. It was the world’s first 99.99% pure silver coin and contains exactly one troy ounce of pure silver. Only the Perth Mint also mints a silver coin that is ‘4 nines’ pure.

Unsurprisingly the Canadian Silver Maple Leaf coin is one of the most popular silver bullion coins in the world. Since the financial crisis of 2008 demand for the government-authenticated coins has increased significantly, with production rising accordingly.

What Are the Benefits of Owning Silver Maple Monster Box?

Should You Invest in Silver Maple Monster Box?

Silver has a low correlation to a number of other financial assets and so choosing to own a Silver Maple monster Box is a brilliant way to add some diversification to your portfolio.

Each coin is 99.99% pure and contains 1 troy ounce of silver. The coins’ quality and authenticity is backed by the Canadian government, which owns the Canadian Royal Mint.The Canadian Silver Maple Leaf Monster box contains 500 1oz coins. It is a great option for someone who is looking to buy silver coins.

Each side of the Silver Maple Leaf has been considerately designed to reflect its origins. One the obverse of the coin there is a portrait of Queen Elizabeth II who has been Canada’s monarch since 1952. Above her portrait, in a circular arc, reads the words ELIZABETH II followed by the face value of the coin ‘FIVE POUNDS’. Below the effigy the year of the coin’s minting is also printed.

On the reverse of the coin there is a drawing of the maple leaf, Canada’s national symbol. ‘9999’ depicts the coin’s purity and is printed twice, once on each side of the leaf. Around the top of the leaf in a circular arc is the word ‘CANADA’, and below the leaf, the coins weight and material are written in both French and English ‘FINE SILVER 1 OZ ARGENT PUR’.

The coin is well known and accepted around the world by dealers and investors alike as over 110 million Silver Maple Leaf coins have been minted since its inception in 1988. This means that the secondary market is highly liquid. Buyers of Silver Maple Leaf Monster Boxes can be sure they will not struggle to sell their coins should they wish to do so.

Silver Maple Leaf Monster boxes are available for purchase in Ireland, the EU and the United Kingdom.

Should an investor choose to do so they can take delivery of their Silver Maple Leaf Monster box. We offer delivery using fully insured international shipping services and national postal services such as Fedex, UPS and Royal Mail.

Clients can be assured that the ultimate discretion is used when we deliver silver maple leaf monster boxes. Packages are unmarked and securely wrapped so as to prevent any rattling, or in fact any signs of what might be inside the parcel.

In the UK investors can expect to receive their silver coins on average 4-10 days after requesting delivery. During periods of high demand, you may be asked to wait up to 15 days to receive your Silver Canadian Maple Leaf Monster.

Prices for insured delivery are competitive.

Clients can choose from a range of secure and insured storage locations in some of the world’s safest jurisdictions. Locations include Delaware, Zurich, London, Hong Kong and Singapore.