You are currently on our IE site. Shop on our United States site using US dollars ($).
Home > Our products > Silver Canadian Maple Leaf Tube of 25 coins 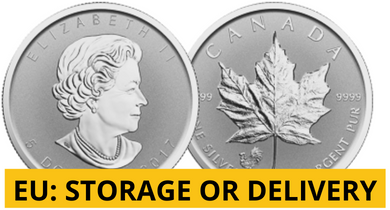 The 1 oz Canadian Silver Maple Leaf was launched in 1988 by The Royal Canadian Mint. It has been produced every year since then and is one of the most popular silver coins with Irish silver buyers.
Silver Maples come in mint tubes of 25 and GoldCore sells Silver Maples by the tube and by the ‘Monster Box’.

As the world’s first 99.99% pure silver coin, the 1 oz Silver Maple contains one troy ounce of pure silver. Its silver content and authenticity are guaranteed by the Canadian government.

What Are the Benefits in Ireland of Buying Canadian Silver Maple Leaf Coins?

The Royal Canadian Mint is located in Ottawa. It uses some of the latest minting technologies in making precious metal bullion coins. It also produces domestic Canadian legal tender coins.
As investor demand for physical silver has increased hugely since 2008, production of the Silver Maple Leaf has risen in accordance. The coin is now one of the best known and most popular 1-ounce silver coins in Ireland and the world.

How Much Silver is in a Silver Maple Leaf Coin?

The Silver Maple Leaf weighs 31.10 grams and has a purity of 99.99% silver. The Royal Canadian Mint was the first mint to attain this 0.9999 purity on its standard bullion silver coins and only The Perth Mint also mints “four 9” silver coins, the highest silver purity of any 1oz silver coin on the market.
The reverse of the Silver Maple Leaf shows a stylised Maple Leaf, Canada’s national symbol, and a description of the silver purity and weight of the coin. The purity is displayed twice horizontally, each side of the Maple Leaf, as ‘9999’ and ‘9999’. In a circular inscription around the top of the image is the issuing country ‘CANADA’, then inscribed below the Maple Leaf are the coin’s weight and metal composition in English and French as ‘FINE SILVER 1 OZ ARGENT PUR’.
The obverse of the coin shows a portrait of Queen Elizabeth II, who, in addition to being The British Monarch, has also been the Canadian Monarch since 1952. The Monarch’s name is displayed in a circular arc above the effigy as ‘ELIZABETH II’, with the face value ‘5 DOLLARS’ and the year, for example ‘2014’ written below. The coin is legal tender in Canada with a nominal face value of $5.
The Silver Maple Leaf has a diameter of 38.00mm, a thickness of 2.87mm, and has reeded coin edges.

The Silver Maple Leaf is 99.99% pure silver and so is a practical way to own physical silver. The silver price has a low correlation with the prices of most other financial assets, so physical silver ownership via Maple Leaf also provides portfolio diversification opportunities.

With over 110 million Silver Maple Leaf coins produced since 1988, the coin is known and accepted by dealers around the world, making the secondary buying and selling market highly liquid due to the large trading volumes.

One ounce Silver Maple Leafs have a much lower cost of ownership than 1 oz Gold Maple Leafs, and so are a more cost effective way of building up a precious metals bullion coin holding.

The Silver Maple Leaf is portable and easy to transport, and its 1oz divisibility allows a partial holding, for example a tube of 25 coins, to be traded if the need arises.

New Silver Maple Leaf bullion coins issued by The Royal Canadian Mint are distributed in uncirculated condition and can be securely stored in their original tube and box packaging in which they are issued.

According to the Silver Institute, the majority of Silver Maple Leaf coins have been exported to Ireland and Europe, with Germany being a major market. Demand from Asia is believed to have grown substantially in the last few years.

What is the History of the Canadian Silver Maple Leaf Coin?

In July 1988, the Canadian Government announced that the Royal Canadian Mint would begin production of a Silver Maple Leaf coin. Production commenced in September of that year, and the coin was launched on 17th November 1988 across six Canadian cities. Demand was so high that in the six weeks up to the end of 1988, the Mint had recorded sales of over 1 million troy ounces of silver.

What is the History of The Royal Canadian Mint?

The Royal Canadian Mint (RCM) has operated as a Crown Corporation since 1969. It has an independent board of directors but is fully owned by the Canadian Government and operates under Canadian legislation. Originally the RCM was a branch mint of the British Royal Mint when it first opened in Ottawa in 1908. The RCM produces circulating coinage for Canada and other countries at its Winnipeg branch, and operates the world famous gold and silver refinery in Ottawa, where it produces high quality bullion bars and coins.

The RCM is a member of the London Bullion Market Association’s good delivery list for both gold and silver good delivery bars, and CME’s Comex exchange recognises The Royal Canadian Mint on its approved refinery list for gold bars.

Where to Buy Canadian Silver Maple Leaf Coins in Ireland?

GoldCore offers Silver Maples and all leading silver bullion coins and delivers throughout the island of Ireland in both the Republic and Northern Ireland.

We deliver silver bullion coins through fully insured international shipping services and national postal services such as Fedex, UPS and The Royal Mail.

Insured delivery in Ireland for silver bullion coins is generally 4 to 10 working days. For certain products and during periods of high demand delivery can be a maximum of 15 working days.

Note: Minimum order for delivery of Silver Maple Coins is 20 troy ounces or one tube of 25 coins.

For larger amounts or those seeking added liquidity, Irish investors can buy Canadian Maple Silver Bullion Coin “monster boxes” and own them in allocated and segregated storage in GoldCore Secure Storage.

GoldCore provides our Irish clients fully insured secure storage facilities in the safest vaults in the safest jurisdictions in the world – in Zurich, London, Hong Kong and Singapore.

Note: Minimum order for delivery of Silver Maple Coins is 20 troy ounces or one tube of 25 coins.