You are currently on our IE site. Shop on our United States site using US dollars ($).
Home > The British Gold Sovereign

The Sovereign is a British gold coin. It has almost a quarter of an ounce of gold or 0.2354 oz. It is probably the most famous gold coin on earth. The modern form of the British gold sovereign has been in production since 1817. It acted as currency during the nineteenth and early twentieth centuries in several countries, including Ireland.

The British gold sovereign coin has a nearly 200-year history, but remarkably, is still produced every year in bullion and proof format by the Royal Mint in Wales.

Although the size and weight of all sovereigns are standard, there is a huge variety of coin designs available in the market. It is thanks to its long history – the design has changed with each monarch, sometimes more than once.

GoldCore provides a large stock of British sovereigns to Irish investors. These can be bought on our website or by calling our office and ordering over the phone. You can also visit our office in Fitzwilliam Square Dublin 2, after booking an appointment.

The latest design of the British sovereign has a portrait of Elizabeth II on the front with the inscription “ELIZABETH II” and “DEI GRA REGINA FED DEF”. It is the Latin abbreviation for “Dei Gratia Regina FideiDefensor” which means "By the Grace of God, Queen, Defender of the Faith".

The portrait of Queen Elizabeth the 11 is based on a design by the sculptor Ian Rank-Broadley. It has appeared on all every British sovereign produced since 1998.

The back of the gold coin has a classic design of St George slaying a dragon. Created by the Italian engraver, Benedetto Pistrucci, this design first featured in 1817 on modern gold sovereigns. The year of issue has been inscribed on every coin beneath the illustration of St George.

History of the Gold Sovereign

Gold coins were first produced in England under King Henry V11. They bore the King’s effigy and therefore were known as sovereigns. Their production continued under every subsequent monarch till 1604.

"Modern gold sovereign" is a term widely used to refer to coins produced since 1817. These sovereigns were introduced as part of the Great Recoinage of 1816. 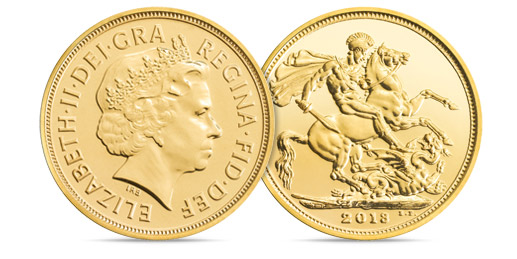 Sovereigns are popularly referred to by the name of the monarch depicted on them. In 1817, the first modern sovereign was introduced under King George 111. It had the King’s effigy on the front and Benedetto Pistrucci’s design of St George slaying the dragon on the reverse. Pistrucci’s design was so popular that it featured on subsequent gold sovereigns, including recent designs.

After Queen Victoria followed the sovereigns of King Edward V11 between 1902 and 1910, then George V between 1911 and 1932. Production of the British sovereign then ceased until 1957 when Queen Elizabeth 11 sovereigns were made.

The gold sovereigns became the most widely used gold coin in the world as the British Empire expanded under Queen Victoria’s reign throughout the 1800s. Originally minted in London, the sovereign was subsequently minted all over the world as Australia and South Africa emerged as significant gold producers. Hundreds of millions of gold coins were produced in the late 1800s and early 1900s in Pretoria, Ottawa, Sydney, Perth, Melbourne, and Bombay.

Ireland shared a common currency, the Sterling pound, with the United Kingdom from 1826. With the currency being on the gold standard from 1821 to 1914 and subsequently, during the 1920s, Irish banks could exchange a £1 note for a fixed amount of gold, in this case, a British gold sovereign. It is not uncommon for sovereigns to be held up to the present day in Ireland for this reason. In fact, you can often see old sovereigns being sold at well-known auction houses in Ireland.

Very few gold coins were ever produced in Ireland. The most re-known were the extremely rare 1646 Duke of Ormondegold pistoles and double pistoles. These consisted of melted French and Spanish gold that were minted to pay Dublin garrison troops who had threatened to desert. Ever since no gold coins were struck in Ireland until the limited edition ECU gold coin of 1990.

The famous design featuring St George slaying the dragon is common to the back on all variations of the coin.