You are currently on our IE site. Shop on our United States site using US dollars ($).
Home > Our products > Austrian Philharmonic 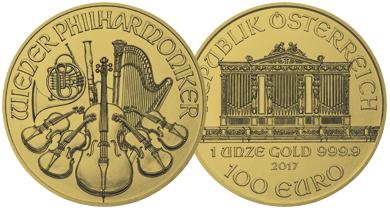 The Austrian Philharmonic is a gold bullion coin (1 oz) that is 0.9999 pure and was first minted by the Austrian Mint in Vienna in 1989.

Buying Austrian Philharmonic gold coins is an easy and simple process. You can buy them online for Insured Delivery in Ireland or Secure Storage using the BUY button or you can call our office to place your order over the phone.

We sell Austrian Philharmonic gold coins and all major bullion coin and bar bullion formats and you can pay by bank wire, credit card, or debit card.

We make a market in Gold Philharmonics and offer fully insured delivery to our Irish clients throughout the island of Ireland - North and South - from our depository partner vaults in London and Zurich.

Insured delivery of Philharmonics, including monster boxes, to homes or offices is also popular and many clients do both - take delivery of some Gold Philharmonics and own the rest in Secure Storage.

Many Irish clients opt to store their Gold Philharmonics in fully insured, offshore Secure Storage jurisdictions. We specialise in offering our clients access to allocated and segregated bullion storage in secure non bank vault partners in safer jurisdictions in the world such as Zurich, Hong Kong, London, and Singapore.

How Much Gold is in a Gold Philharmonic Coin?

The Vienna Philharmonic or Austrian Gold Coin Philharmonic are minted in gold, silver, and platinum bullion by the Austrian Mint (Münze Österreich AG).

Like all bullion coins, the coin has an intrinsic value that is based primarily on the precious metal content and the spot price of that precious metal on international markets.

It is named after the world famous Vienna Philharmonic orchestra (Wiener Philharmoniker), which inspires the design of both sides of the coins. The one troy ounce (1 oz) gold version was first introduced in 1989 with a face value of 2,000 Austrian schillings and remains one of the world's best selling bullion coins.

Philharmonics are minted according to global demand and thus production levels or mintage changes from to year to year. While the year of issue changes every year, the beautiful design on the coin remains the same every year.

From the outset, the front or obverse of it depicts the pipe organ in the Vienna Music Golden Hall. The reverse of the coin shows instruments of the Vienna Philharmonic, including Vienna horn, bassoon, harp, and four violins centered on a cello. Both designs were created by Thomas Pesendorfer who is the chief engraver of the Austrian Mint.

GoldCore only sells gold coins from trusted government mints such as The Royal Mint, The U.S. Mint, The South African Mint, The Royal Canadian Mint, The Perth Mint and The Austrian Mint.

Austrian Philharmonic Gold coins are some of the most popular and liquid gold bullion coins in the Irish market. Gold bullion buyers can buy Gold Philharmonics VAT FREE in Ireland.

Whether you decide to take possession of your precious metals or have them stored safely on your behalf with a secure third party, Philharmonic coins are an excellent bullion coin to own.

Gold Philharmonics typically command premiums of between 4% and 5% with GoldCore who offer some of the most competitive premiums for both delivery by post in Ireland and for secure international storage. Gold Philharmonic coins are not as popular in Ireland as Gold Krugerrand coins or Gold Maple Leafs.