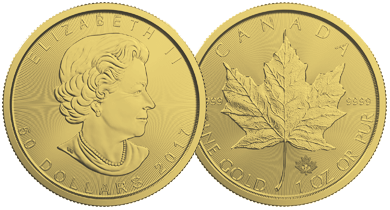 What is a Canadian Gold Maple Leaf Coin?

The Gold Maple Leaf is technically a legal tender coin in Canada, hence the face value of $50, but it is popular as a non-circulating investment or store of a value bullion coin.

They are one of the most popular and liquid 1 oz gold bullion coins in the world. GoldCore has been delivering Gold Maple Leaf coins to our Irish clients since our inception in 2003.

Buying Gold Maples is an easy and simple process. You can buy them online for Delivery in Ireland or Secure Storage using the BUY button or you can call our office to place your order over the phone.

We sell Gold Maples and all major bullion bar and coin products and you can pay by bank wire, credit card, or debit card.

We make a market in Gold Maples and offer fully insured delivery to our Irish clients throughout the island of Ireland - North and South - from our depository partner vaults in London and Zurich.

Insured delivery of Gold Maples, including monster boxes, to homes or offices is also popular and many clients do both - take delivery of some Maples and own the rest in Secure Storage.

Many of our Irish clients opt to store their Maples in fully insured, offshore Secure Storage jurisdictions. We specialise in offering our clients access to allocated and segregated bullion storage in secure non bank vault partners in safer jurisdictions in the world such as Zurich, Hong Kong, London and Singapore.

How Much Gold is in Gold Maple Leaf Coins?

The Gold Maple Leaf coins were the world’s first 0.999 fine or 24 carat pure bullion gold coin when it launched in 1979. The most recent version of the Canadian gold bullion coin has a gold content of 99.99%, making it almost pure 24 carat gold. The purity or fineness and authenticity of the bullion coin is backed by and guaranteed by the Canadian government.

The Maple Leaf gold coin has a weight of exactly 1 troy ounce or 31.103 grams - meaning that there is almost exactly one troy ounce of pure gold in each gold bullion coin.

What Size is the Gold Maple Coin and What design is on a Gold Maple Leaf Coin?

These Canadian gold bullion coins (1 oz) have and a diameter of 30mm and a thickness of 2.87mm.

The front or obverse of the coin has the head of Queen Elizabeth II, surrounded by the words “ELIZABETH II” and “50 DOLLARS”, as well as the year of issue. The Queen is the Canadian Monarch is addition to being the Queen of England.

On the reverse of the coin is a highly detailed near proof quality representation of a Maple Leaf, Canada’s national emblem.

To each side, the fine gold content 9999 is specified, with “CANADA “in a circular inscription across the top, and “FINE GOLD” “1 OZ OR PUR” in French, below. Interestingly, “Maple Leaf” is not written anywhere on the beautiful bullion coin.

The idea of a 1 oz gold Maple Leaf coin was first was studied by Canadian government officials from as early as 1977. The motivation was that it would create a source of demand for Canadian mined gold and compete with South Africa’s 1oz gold Krugerrand coin.

In fact, the Canadian federal cabinet specified that the Maple Leaf had to be minted from gold mined within Canada.

Originally the Maple Leaf was planned to be minted on a three year trial basis with a production of 5 million over 3 years, 1 million coins in 1979 and 2 million in each of 1980 and 1981. The Maple Leaf was aimed at both the international and Canadian markets with 4 million of the original 5 million planned production coins being targeted at the U.S. and European markets, and within Europe the West German market was earmarked for a 1.6 million allocation.

The Maple Leaf proved so popular that in 1981 the Canadian Government renewed legislation to continue production of the coin.

When the Maple Leaf was launched in 1979 it had a fineness of .999 or 99.9% gold. This was, at the time, the highest gold content of any bullion coin ever produced, since other gold coins were typically 22 carat, with a fineness of .9167. In 1982, The Royal Canadian Mint went one step further and improved the purity to a fineness of .9999 gold. All Gold Canadian Maple Leafs produced since 1982 are 99.99% pure gold.

The Royal Canadian Mint (RCM) has operated as a Canadian Crown Corporation since 1969. It has an independent board of directors but is fully owned by the Canadian Government and operates under Canadian legislation.

Originally the RCM was a branch mint of the British Royal Mint when it first opened in Ottawa in 1908. The RCM produces circulating coinage for Canada and other countries at its Winnipeg branch and operates the world famous gold and silver refinery in Ottawa, where it produces high quality bullion bars and coins.

The RCM is a member of the London Bullion Market Association’s good delivery list for both gold and silver good delivery bars, and CME’s Comex exchange recognises The Royal Canadian Mint on its approved refinery list for gold bars.

The Maple Leaf is the highest purity 1oz gold coin on the market, with a 9999 fineness making an investment in a Maple Leaf an investment in pure gold. It is good for exposure to the gold price but more importantly, they provide the diversification and financial insurance benefits of physical gold bullion.

The coin is very well known in Ireland and internationally and more recently, the coins have become popular in Asia. There is, therefore, a well-developed trading network internationally for buying and selling the Maple Leafs.

Thus, the secondary market for Gold Maple Leafs is very liquid given that tens of millions of 1oz Maple Leaf coins have been produced in nearly forty years. The high liquidity means premiums over the spot price and the spread are competitive.

The 1oz denomination makes the Maple Leaf very easy for investors to value and price using the internationally quoted spot price of gold.

Practically, the Maple Leaf, since it’s a 1oz coin, is portable and easy to store, and the small denomination brings benefits of divisibility such as being able to sell some of your gold holdings without selling an entire gold holding.

GoldCore has supplied gold bullion coins including Gold Maples to Irish investors since our inception in 2003.