You are currently on our IE site. Shop on our United States site using US dollars ($).
Home > Our products > South African Krugerrand 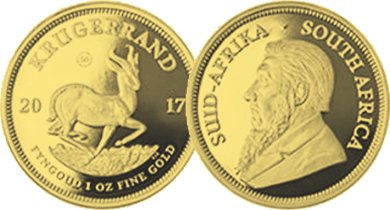 Krugerrand Gold Coins were designed and first minted in 1967 specifically as investment gold coins. South African Krugerrands were mass-produced to help retail investors purchase gold bullion with ease and confidence. They are widely traded on the global gold markets and well over 50 million have been created. They are therefore competitively priced and highly liquid.

GoldCore has supplied gold bullion coins including Gold Krugerrands to Irish gold buyers since our inception in 2003.

How to Buy Gold Krugerrands?

Buy Krugerrands in Ireland easily just by following a set of steps. You can buy them online for Delivery or Storage using the BUY button or you can call our Irish office to place your order over the phone.

GoldCore sells Gold Krugerrands and all major bullion gold bar and coin products and you can pay by bank wire, credit card, or debit card.

We make a market in Krugerrands and offer fully insured delivery to our Irish clients throughout the island of Ireland - North and South - from our depository partner vaults in London and Zurich.

Many of our Irish clients opt to store their Krugerrands in fully insured, offshore GoldCore Secure Storage jurisdictions. We specialise in offering our clients in Ireland and internationally access to allocated and segregated bullion storage in secure, nonbank vault partners in safer jurisdictions in the world such as Zurich, Hong Kong, and Singapore.

What is the price of a Gold Krugerrand in Ireland?

In order to determine the price of a Gold Krugerrand, simply multiply the spot price of gold by the number of a gold troy ounce in the Gold Krugerrand (1 ounce) and then add or subtract the current premium for the coin or coins.

The value of a Gold Krugerrand is its competitive price, the high degree of popularity, and international liquidity. They are considered to be a portable store of value and a vital form of financial insurance. They are one of the best ways for Irish gold buyers and investors to own physical gold. For 50 years, they have acted as a hedge and protected gold owners from domestic and international financial and monetary risks.

How Much Gold is in a Gold Krugerrand?

Gold Krugerrands are 22 karat gold coins, with a fineness of 0.9167 or 22/ 24 pure gold. It is made of 11 parts gold to 1 part copper, creating an alloy known as a crown coin. The copper is added to provide durability and strength to the coin.

The coin has a maximum diameter of 32.77mm and a thickness of 2.84mm. There are 180 serrations on the coin’s rim. The reverse of the Krugerrand shows an image of South Africa’s national animal, the Springbok. The front (obverse) of the Krugerrand bears the profile of Paul Kruger.

What is the History of the 1 oz Gold Krugerrands?

The Krugerrand is named after Paul Kruger, a former President of the South African Republic in the late 1800s. Kruger is famous as the South African leader of the Boers against the British Empire in the 1899-1902 Boer War.

The ‘Rand’ in the coin’s name comes from the South African currency, the Rand which is itself named after the world-famous Witwatersrand Gold Reef in the Transvaal, the largest gold-producing area in the world.

Who Makes the God Krugerrands Sold in Ireland?

The Rand Refinery produces the coin blanks for gold Krugerrands which are minted by both the Rand Refinery and the South African Mint Company and distributed by GoldCore from our offices in Dublin.

The Rand Refinery is a private company owned by four leading South African gold mining companies, namely, Goldfields, AngloGold Ashanti, Harmony, and DRDGOLD. The refinery, located in Germiston, east of Johannesburg, is the largest single gold refining and smelting site in the world and has refined more than 25% of the world’s gold mining output.

It is regarded by gold market participants globally as one of the world’s premier precious metals refineries.

Gold Krugerrands have legal tender status in South Africa but they have never recorded a face value on the obverse or reverse side of the gold coin. This was done in order to underline that the value of each gold coin is directly related to the prevailing value of their fine gold content rather than an arbitrary fiat value.

Gold Krugerrands typically command premiums of between 3.3% and 4% with GoldCore who offer some of the most competitive premiums for both deliveries in Ireland and for secure international storage.