You are currently on our IE site. Shop on our United States site using US dollars ($).
Home > Our products > Silver South African Krugerrand Tube of 25 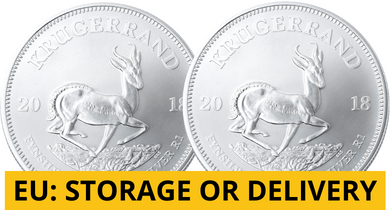 What are silver krugerrands?

The silver Krugerrand contains one troy ounce of 999 fine silver. It was first issued in 2017 to commemorate 50 years since the first issue of the gold krugerrand. Since the limited release the Rand Refinery, on behalf of the South African government, has continued to offer new issues each year.

What are the main benefits of owning silver Krugerrands in Ireland

Silver Krugerrands are made from 0.999 silver and weigh just over 31g. They are a great way for investors to diversify their portfolios as silver traditionally has a low correlation with other more ‘mainstream’ investments. Therefore, they perform well in times of uncertainty and high risk.

Silver Krugerrands' design is exactly the same as its gold counterpart. On one side you will find the image of former South African president  Paul Kruger, and on the other the Springbok antelope, one of the national symbols of South Africa.

Despite its relatively short life, the silver Krugerrand has quickly cemented its place as one of the world’s most popular silver bullion coins. This means that it is very easy to both add to or to liquidate some or all of your holdings, should you wish to increase or reduce your exposure to the precious metals market.

Silver coins are particularly popular amongst buyers as they are more affordable than gold coins. Many investors buy silver coins as a more cost effective way of building up a precious metals holding.

The size of 1 oz silver Krugerrands means that they are transportable and could be easily used as legal tender, should they be required.

The Rand Refinery also produces the Gold Krugerrand which is the world’s most popular gold coin.

How to Buy South African Silver Krugerrands for Storage in Ireland?

We offer silver coins for delivery throughout Ireland. We only send silver bullion coins by insured delivery. Our preferred carriers are international shipping services and national postal services such as Fedex, UPS and Royal Mail.

Silver coins are delivered in discreet packaging, carefully wrapped to ensure no damage and to muffle any sound.

You can expect to receive your silver bullion coins generally within 4 to 10 working days. But please be aware that for certain products and during periods of high demand delivery can take up to a maximum of 15 working days.

Note: the minimum order for delivery of silver Krugerrands is WHAT IS IT?

How to Buy South African Silver Krugerrand Coins for Storage in Ireland?

Investors may choose to keep their silver in storage. This is beneficial for two reason:

If you would like to avoid paying VAT on your silver bullion coins then you should consider storing them in outside of the EU in GoldCore’s bonded vaults.

If you choose to store your silver in bonded warehouses outside of the EU (Hong Kong, Singapore and Zurich) then you are not liable to pay VAT on your holdings.

Should you decide to move your silver to Ireland, at a later date then VAT may then be applicable.