Home > Why You Should Buy Silver in Ireland Today

Why buy silver in Ireland today? Silver remains both a rare commodity and a form of money or financial insurance. It has been a medium of exchange for thousands of years due to its inherent value. Today, silver is a legal tender minted by national governments and favoured by silver bullion buyers in Ireland and all over the world.

Silver bars and silver coins, just like gold, have been used as money for centuries. The Irish word for money or silver is “airgid”, which is similar to the French word “argent,” or Spanish word ‘plata,” which both mean money or silver. Indeed the word “silver” and “money” are interchangeable in at least 90 languages.

Silver was demonetized as currency in the second half of the 20th Century. The US used silver coins until as late as 1969, and these silver coins are still purchased by silver buyers today in the form of 90% and 40% legal tender bags.

However, silver bullion remains a precious metal due to its rarity and high demand in industry, technology and medicine. There is indeed high demand worldwide from dealers, individuals and corporations who buy silver coins and bars. They see silver as very undervalued vis a vis gold and the stocks, bonds and property markets which are increasingly bubble-like.

Silver has an intrinsic value, which means that silver coins and bars have a value in and of themselves due to their rarity, limited supply and very robust demand.

Silver is also very commonly used in jewellery and collectable coins. It also has treasured industrial and technological applications such as malleability, thermal and electrical conductivity, while its resistance to corrosion is unparalleled among precious metals.

Most people are familiar with the old expression warning against “selling the family silver”, but not everyone appreciates its wisdom.

Silver bullion, like gold, has been and is again increasingly regarded by investment managers and financial advisors as a sound financial hedge against inflation, war, terrorism, stagflation and fiat currency devaluations and crises.

After the shock Brexit vote, the Sterling Pound fell sharply while the silver price was nearly 50% up in sterling terms, again showing its value as a currency hedge.

Today, there persists a real risk of inflation in essential commodities and deflation in debt dependent goods, services and assets. The western world looks increasingly vulnerable to inflation in items necessary for society to function, such as oil and natural gas, wheat, grain and rice. On the other hand, there is a risk of deflation in non-essential items such as luxury goods, and assets like equities, bonds and property. 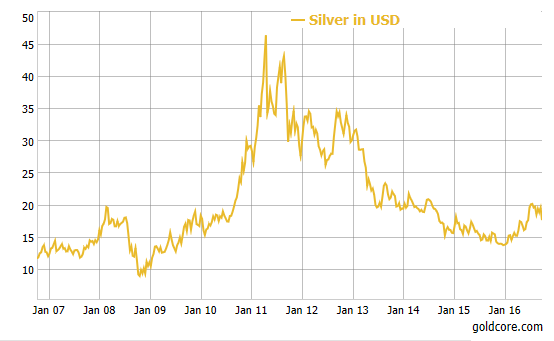 A review of the silver price chart shows that its price performance rose every single year from 2002 to 2007. After massive gains of over 250% in 5 years, it then succumbed to a 23% loss in 2008. However, this was a little pause and correction before further gains as the financial crisis began to impact sovereign nations.

The silver price saw major gains of +49% in 2009 and +77% in 2010, as the global debt crisis worsened, fears of contagion spread in the EU, and massive quantitative easing (QE) and global currency debasement continued.

Similar conditions are likely to be seen in the coming years. Silver bullion will continue to act as a hedge and protect investors who buy silver once again.